Introduction: Sex may be determined from various parts of the human body like the skull remains, femur, humerus etc. However, in forensic cases, when human skeletal remains (such as skull, pelvis, femur, humerus, radius, clavicle, and ulnae etc.) are fragmented or incomplete, the teeth may be used for sex determination. The aim and objective of the present study: i) To assess the degree of sexual dimorphism in maxillary canines, first premolars and first molars using diagonal diameters of the crown (mesiobuccal-distolingual: MBDL, mesiolingual–distobuccal: MLDB/ DBML). ii) To determine the accuracy of maxillary canines, first premolars and first molars using diagonal measurements of the crown in sex determination.

Materials and Methods: This study included 30 participants with equal gender ratio i.e 15 males:15 females and age ranged from 18 to 30 years. The participants were selected from Pondicherry population who visited to our department. Crown diagonal measurement of canines, first premolars and first molars were taken from right and left sides with the help of digital caliper (resolution of 0.1mm, accuracy of ±0.2mm). Data was analysed statistically using descriptive analysis and discriminant function analysis.

Conclusion: We conclude that diagonal crown (MBDL crown) dimension of left maxillary canine and first molar, right maxillary first molar can be used as an aid for gender determination where linear crown width (MD and BL) measurements cannot be taken or used as an aid along with other accepted procedures for sex determination in Pondicherry cohort.

The human identification is the recognition of an individual based upon the physical characteristics unique to the individual. There are four main attributes of biological identity that the forensic dental anthropologists may desire to evaluate, those are gender, age, stature, and ethnic or racial background of an individual. Identifying gender from unidentified human body is of outmost importance for medico-legal investigations, and is usually the initial step in personal identification process.1

Studies have proven that no two oral cavities are alike and similar to fingerprints, odontometric measurements are also unique and can be used for gender identification. The main rationale teeth are used in medico-legal case is the fact that they are the hardest organ in human body and thus resistant to various kind of insults that may occur in mass disasters.2

Determining gender with the help of dental features is primarily achieved by comparing the tooth dimensions in males and females using traditional linear odontometric measurements (mesio-distal and bucco-lingual width) of the crown of teeth. However, these dimensions get affected by attrition, interproximal wear facets, cervical abrasions, crowding, and presence of dental calculus in cervical third. Further, these dimensions are difficult to measure when the teeth are still held in socket. Hence, alternative measurements including the crown and cervical diagonal diameters were developed. According to Hillson et al., most of the archaeological and fossil remains of human teeth exhibit heavy attrition of usual crown diameters but alternative diagonal measurements are not affected until later stages of wear. Mesiobuccal-distolingual crown width, mesiolingual-distobuccal crown width, mesiobuccal-distolingual cervical diameter and mesiolingual-distobuccal cervical diameters are various diagonal parameters proposed by Hilson et al.3

Sexual dimorphism is the systematic difference in form between males and females of the same species. Dimorphism in tooth size can be estimated by measuring mesiodistal and buccolingual crown widths, distances of molar cusps and diagonal dimensions.4 Therefore, this study was conducted on Pondicherry population using diagonal measurements.

This survey comprised of 30 participants with equal gender ratio i.e 15males:15females. The participants were selected from Pondicherry population who visited to our department and fulfilled the following criteria:

After obtaining informed consent from all the selected participants, impression of full maxillary arch of each participant was made using alginate impression material and perforated dental impression tray which was poured using dental stone without delay to avoid any dimensional alterations. All crown diagonal measurements of canines, first premolars and first molars were taken from right and left sides with the help of digital caliper (resolution of 0.1mm, accuracy of ±0.2mm) by placing the digital calliper parallel to the occlusal surface (Figure 1). The following points were taken as guide during the measurements as defined by Hillson et al.3 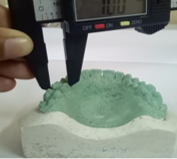 All the measurements (in mm) were measured by one examiner to eliminate inter-observer error. Data obtained from various measurements was then analyzed statistically using descriptive analysis and discriminant function analysis with software IBM SPSS version 20.0. P <0.05 was considered significant.

To calculate the percentage of sexual dimorphism for the diagonal measurements of different teeth, following formula was applied.5

Two diagonal measurements (crown) on each tooth, total 12 measurements on both sides were obtained from each participant.

Mean, SD, p values of the study measurements between males and females

Teeth are considered as an excellent material for living and non living population for anthropological, genetic, odontologic and forensic studies.6 They are known to resist the effects of various types of insults that may occur in natural or man-imade calamities and hence often recovered intact. Hence, they can be considered as a helpful adjunct in the human identification purpose where other body parts cannot be used due to their bacterial decomposition, mutilation or fragmentation.

In forensics, traditional linear odontometric (mesiodistal and buccolingual width) measurements have been routinely used for sex determination. Although, these measurements provide accurate results and suggested to be preferred method if width measurements are possible but condition like tooth rotations, crowding, orthodontic anomalies, occlusal attrition, mesio-occlusal, disto-occlusal, mesio-occluso distal fillings may prevent taking accurate width measurement. In those circumstances, diagonal measurements would be of help in determing gender. Additionally, these diagonal axes exclude the contact points of the crown, and are therefore not affected by proximal attrition until the facets become large enough to include them. However caution is needed in taking diagonal measurements as measurements will go wrong if the calipers are not placed correctly.7

According to our results, all crown diagonal measurements in male revealed higher mean value than female except left first premolar crown MBDL (male=7.8600, female=7.8733). This results is in agreement with other previous study3 revealing dimorphic differences between male and female teeth. However, difference was statistically significant in our present study in relation to left canine and left first molar MBDL crown dimensions, right first molar MBDL crown dimensions. The rationale behind sexual dimorphism in crown morphology and size of the permanent dentition is the difference in amount of enamel, dentin and pulp tissue between sexes. 4 According to Moss, sexual dimorphism in teeth is because of the greater thickness of enamel in males due to long period of amelogenesis compared to females and the Y chromosome producing slower male maturation.8

B Rai et al.9 assessed the accuracy with which sex can be differentiated by odontometric analyses in a North Indian population. The study material consisted of 445 with 233 Males:212Females in the age group ranging from 17-57 years. They found significant sexual dimorphism in all crown diagonal dimensions of right canine (DB-ML and DL-MB) with males being higher mean value in diagonal measurements than females which is inconsistent to our results.

Amongst the teeth evaluated in the present study, MBDL crown dimension of left first premolar exhibited the lowest percentage of dimorphism (-0.12%). No significant difference was observed in all crown diagonal dimensions of both right and left first premolars between male and female. These findings seem to be commonly observed. Our result is in accordance with earlier similar study conducted by Manchanda et al.5 on North Indian population wherein both upper and lower premolars showed no significant gender dimorphism. Dumpala et al.4 have also reported no significant sexual dimorphism in right first premolar between male and female in both tribal and urban population.

Sathawane et al.10 evaluated mesiobuccal-distolingual (MBDL) and distobuccal-mesiolingual (DBML) crown measurements of seven permanent maxillary and mandibular teeth for sexual dimorphism. They considered right central incisor, lateral incisor, canine, first premolar, second premolar, first molar and second molar from each jaw for their study. Study sample consisted of total 40 participants with equal gender ratio from a Central Indian population. They observed significant sexual dimorphism in all crown diagonal measurements of seven permanent maxillary and mandibular teeth. Our results are not consistent with their results, as no significant gender dimorphism was observed in all crown diagonal dimensions of right side teeth except right first molar crown MBDL measurement (p value= 0.034 ). Eleni Zorba et al.11 in their study reported significant sexual dimorphism in two crown diagonal dimensions of maxillary first molar and second molar of modern Greeks which is also inconsistent to our results. In the present study no significant sexual dimorphism observed in MLDB dimensions of molars.

Limitation of the Study

The limitations of this study is that it was a cohort study, and we recommend a longitudinal study to further validate the prospects of this study.