Association of blood groups with malocclusion

The influence of genetic and environmental factors in the etiology of dental malocclusion has been a debate and controversy in orthodontic literature.1 Malocclusions have a multi-factorial origin and can hardly be attributed to a single specific cause. The causes will include general factors, such as genetic and hereditary components, nutritional deficiencies, abnormal pressure habits and local factors located directly in the dental arch such as supernumerary teeth, tooth decay and premature loss of deciduous teeth.1 However, genetics plays a significant role in causing malocclusions. Epidemiological evaluations can reveal relationships between malocclusions and genetic characteristics or accompanied diseases, which will help to recognize and treat them. One of the most important human genetic characteristics is the relationship between the ABO blood group system and malocclusions.2 With the use of ABO blood groups and some enzyme polymorphs, it is be possible to determine the zygosity of twin, which are especially helpful in twin studies concerning the role of heritability of malocclusion.2

ABO blood group system is one of the most important system defined in 1901 by Karl Landsteiner who received a Nobel Prize in 1930 and together with Weiner, discovered Rh system in 1940.3 There are two antigens, A and B, in the ABO system, which are present on cell membranes or secreted into the plasma and other fluids of the body. The presence or absence of these antigens results in four blood groups or blood types: A, B, AB, and O. These antigens are present on the 9th chromosome and are inherited codominantly.4 Since the malocclusion and blood groups are related to genetic components, it can be hypothesized that blood groups have an association with dental malocclusions. Research has been carried out to find out the relationship between ABO blood groups and various systemic diseases, and the results showed that some diseases like dental caries,5 salivary gland tumors,6 oral cancer,7 hematological malignancies,8, 9 etc. have significant association with blood groups.

The purpose of this study was to evaluate the association of blood groups with malocclusions.

The sample of 132 subjects consisting of 56 males and 76 females from the department of orthodontics of our university for treatment of malocclusion. They were divided into Class I, Class II and Class III malocclusion as well as horizontal and vertical skeletal patterns.

Dental parameters were analyzed and categorized according to Angle’s classification of malocclusion, i.e. Class I, Class II and Class III malocclusions.14

Angle’s Class I molar relationship is one in which mesio-buccal cusp of maxillary first permanent molar occludes in the buccal groove of mandibular first permanent molar with one or more of these characteristics: Crowded incisors or labial canines, protruded maxillary incisors, anterior end to end occlusion or anterior cross bite, unilateral or bilateral posterior cross bite, mesial drift of molars, anterior or posterior open bite and deep anterior overbite.14

Skeletal patterns were analyzed and divided into Class I, Class II and Class III using the following parameters

Is formed by the intersection of S (Sella), M (midpoint of the anterior maxilla), and G (center at the bottom of the symphysis), to form the YEN angle measured at M (117-1230)

It is the angle between SNA and SNB consist of A point, Nasion, B point and indicates whether the skeletal relationship between the maxilla and mandible is a normal skeletal class I (+20), a skeletal Class II (+40 or more), or skeletal class III (00 or negative) relationship.

The angle between the A-B line and the perpendicular through point A from the apparent axis of the condyle (C) constitutes the beta angle. Beta angle between 270- 350 can be considered to have class I skeletal pattern.

It is the angle formed between the Frankfort horizontal plane (FH) and the mandibular plane. FMA of 250+/- 50 is within normal range. A high angle patient has an FMA of 300 or more, and a low angle patient has FMA of 200 or less

The surface of red cell membrane contains a variety of genetically determined antigens, called isoantigens or agglutinogens while the plasma contains antibodies (agglutinins). To determine the blood group of a person, his/her red cells are made to react with commercially available antiserum containing known agglutinins. The slide is then examined by naked eye or under the microscope to detect the presence or absence of clumping and hemolysis (agglutination) of red cells, which occur as a result of antigen-antibody reaction.

Finger was pricked under aseptic conditions and two drops of blood were added to the saline on the slide and mixed with toothpick to prepare red cell suspension.1 drop of antisera A, B and D was placed on the respective slides and 1 drop of normal saline was placed on control slide to confirm agglutination or no agglutination.(Figure 2) Antisera and red cell suspension were mixed with the help of separate toothpicks. After 8-10 min, all the three antisera- red cell mixtures on the slide were inspected, first with the naked eye to see whether agglutination (clumping or hemolysis) had taken place or not and using the control slide as reference. (Figure 3). Agglutination appeared as a coarse separation of red cells in isolated clumps (red precipitates of cells) and this agglutination was confirmed under low magnification microscope.

Thus, the presence or absence of agglutination indicated the individual’s blood group or blood type as A, B, AB and O along with Rh+ve and Rh-ve (Table 1).

The data collected was statistical analyzed and the information obtained was processed using SPSS software (version 20) and the Chi-square test (Table 4). Kruskal Wallis test and Mann Whitney U test (Table 5) were performed to compare significant differences in each testing parameters with blood groups. The differences with P < 0.05 were considered statistically significant 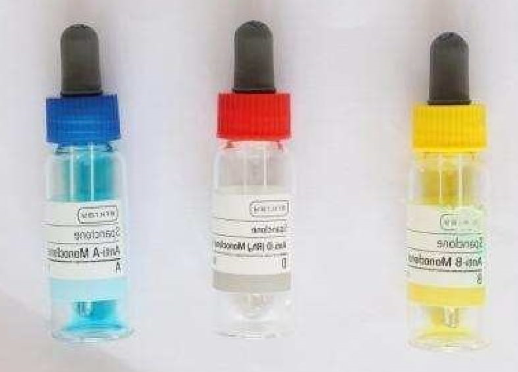 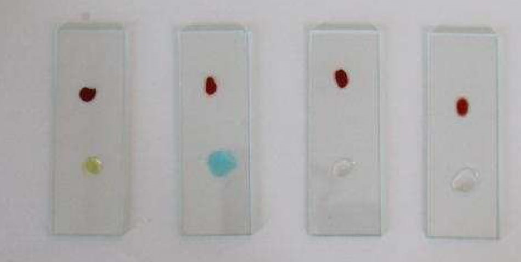 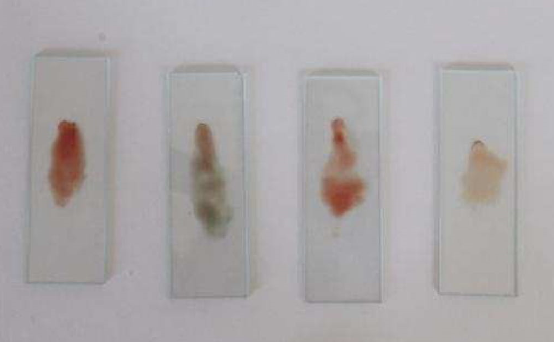 Distribution of malocclusion per each blood group

This study on the association between malocclusion and blood groups, included subjects who were clinically assessed by a single operator to minimize inter-operator bias. Subjects with overall good health were included to assess blood groups, so as to have a proper evaluation and classification of blood groups. The distribution of ABO blood groups may also vary regionally, and from one population to another. Malocclusion is a multi-factorial disease and the etiology of the disease has not been clearly established yet with genetic factors probably playing a role. The purpose of this study was to identify such a possibility and to correlate blood group and with malocclusion

Non O blood groups are associated with the risk of ischemic heart disease and of developing severe manifestations of atherosclerosis. 8, 15, 16, 17, 18, 19, 20, 21, 22, 23, 24, 25 Compared to A, B and AB individuals, O group individuals have a 14% reduced risk of squamous cell carcinoma and 4% reduced risk of basal cell carcinoma and pancreatic cancer. 26 The B antigen has linked with increased risk of ovarian cancer Gastric cancer has been reported to be common in blood group A and least in group O According to Glass et al. 9 the O blood group has an increased risk of infection with cholera and the severity of infection was worse compared to others. Reid et al. 17 and Hadley et al. 18 have shown relationship between blood group and congenital cataract in the Asian race. Cardiovascular diseases are more prevalent in A, O and non-O blood groups. 5, 17, 19, 20 Diabetes mellitus may be higher in subjects of blood groups A and O. 21 Along with these findings, the ABO groups have been suspected of having a role in causation of infertility and fetal loss, but reports were found to be conflicting. 22

Thus, it is clear that several studies have been carried out to investigate the relationship between ABO blood group and incidence of disease in medicine, but limited research has been carried out to investigate the association between ABO blood groups and oral diseases. Few reports claimed that there was a relation of blood groups and increased incidence of oral diseases. 5, 13, 23, 24, 25, 27, 28 However some others could not find association, which may be due to geographical diversity in the population. 11, 23, 24, 25, 29, 27 Vivek et al. 27 found that subjects with blood group O and Rh+ had a greater propensity for periodontitis . Gheisari et al. 30 showed that among different blood groups; blood group B were found to have a greater association with other dental malocclusion and the association of such deformities was found to be the least with blood group A. Demir et al.28 found that different ABO blood groups show significant differences in the rates of colonization of periodontal pathogens that are the main etiologic agents of periodontal diseases. It has also been reported that blood group A seems to have an association with oral pathologies such as dermatophytosis. 31

R S Kaslick A I Chasens M A Tuckman B Kaufman Investigation of periodontosis with periodontitis: Literature survey and findings based on ABO blood groupsJ Periodontol1971422420710.1902/jop.1971.42.7.420