Prolonged orthodontic treatment timing might cause pathologic changes like root resorptions, periodontal problems & psychological impact on patients. By shortening of treatment duration it helps to prevent undesired sequelae & increased motivation towards treatment. Recently a number of techniques with the potential to reduce treatment time had been administered. The major categories were: - Biological through local or systemic administration of drugs, Mechanical or physical stimulation such as vibrators & low energy lasers, surgically facilitated accelerated orthodontic treatment like corticotomy and piezocision. Therefore the aim of this study is to help in evaluating the knowledge & utilization of techniques used by an orthodontists & Post-graduates in their practice.

One of the chief concerns of most patients during orthodontic treatment is its prolonged treatment duration. Besides the burden of prolonged duration on patients, it also poses many disadvantages like predisposition to dental caries, periodontal problems, and root resorption & pschycological impacts on patients.1 Orthodontic treatment protocol is based on the fact that when a force is applied to tooth it is transmitted to its adjacent investing tissue structures which induce certain cellular, chemical and mechanical events within these tissue structures which contribute to structural alterations and causes tooth movement. However the entire process is slow and ranges between 12-48 months. Recently many procedures have developed which aims to reduce the treatment time by up to 70%.2 Procedures that aims to reduce treatment time and accelerate the orthodontic tooth movements comes under the following categories: - 1) Biologic- Through systemic or local administration of drugs. 2) Mechanical/ Physical stimulations- such as low- energy lasers and vibrators. 3) Surgical methods- like corticotomy and piezocision, etc.3

Regardless of all these newer approaches to reduce treatment time, an orthodontist’s perception regarding these techniques based on their familiarity or acceptability in their clinical practice is not very well known.4 Hence the objective of this questionnaire study is to evaluate the knowledge of these procedures and their level of acceptance and utilization of these procedures in their practice.

The main purpose of this study was to evaluate the perspective of orthodontists and post-graduate students on the knowledge of accelerated orthodontic techniques for shortening orthodontic treatment duration and their level of acceptance of these techniques in their practice.

The prospective questionnaire study was conducted amongst 200 orthodontists and post-graduate students. All individuals who have agreed to participate in the study have agreed to an informed consent. The study was a questionnaire based study in which a google form was made and circulated via e-mail & whatsapp to all active members with a link. The e-mail was accompanied by an introductory cover letter and an information sheet (online only) that contained all clinical procedures that could accelerate the rate of tooth movement to ensure full understanding of the questions. One week after the initial mailing, a reminder e-mail was sent for Completing and submitting the online survey implied consent. The inclusion criteria of this study comprise of professional orthodontists and undergoing postgraduate trainee (specialization program) and they should be practicing exclusively in the field of orthodontics.

The questionnaire comprises of 8 questions on the knowledge, treatment duration, utilization of techniques and associated complications to accelerate tooth movement.

Some of the questions were as follows 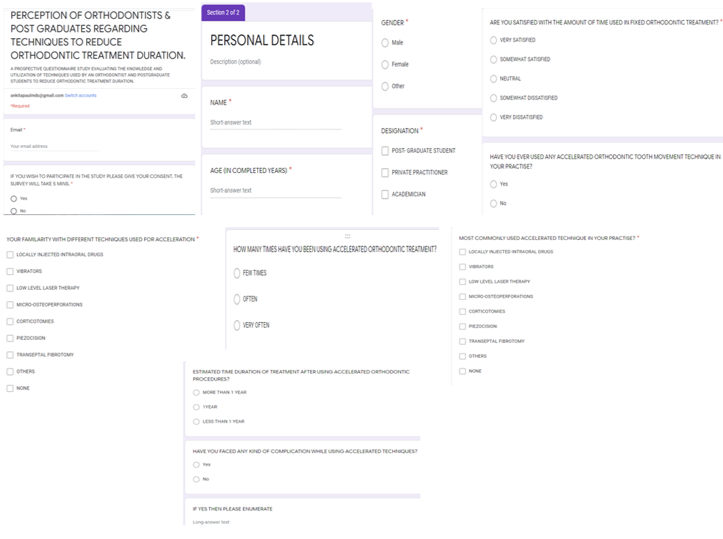 Among the techniques to reduce the treatment time,69.8% of professionals mentioned they knew micro- osteoperforations, followed by corticotomy (55.8%), low level laser therapy (46.5%), locally injected intraoral drugs & transeptal fibrotomy (39.5%), piezocision (37.2%), vibrators (30.2%) and 9.5% professionals uses other techniques. Whereas 14% professionals are not familiar regarding these accelerated procedures as seen in Figure 2.

However 53.5% of them have used micro-osteo perforations in their practice followed by 14% corticotomy and transeptal fibrotomy, 9.3% piezocision, 7% low level laser therapy, 4.7 % locally injected intraoral drugs and vibrators, 4.7% have been using other techniques and 18.6% have not used any of them as seen in Figure 3.

Regarding the mean treatment duration, most professionals indicated duration of treatment between 1 year or more than 1 year, regardless of the evaluated techniques as seen in Figure 4.

86.1% of professionals have not faced any complications while using accelerated techniques while 13.9% have faced minor complications like pain and patients discomfort in surgical procedure, Delayed treatment duration or no movement at all as seen inFigure 5. 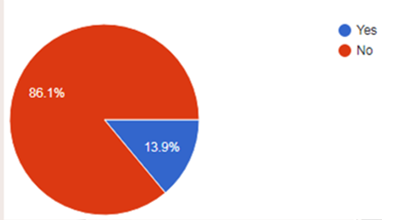 In the past decade, orthodontic advances have mainly focused on optimization of orthodontic treatment, especially using newer accelerated techniques to shorten the duration of treatment. Several techniques are advertised in recent years to accelerate tooth movements. Amongst all the available options the most researched are: corticotomies, piezosurgeries, microperforations, low level laser therapy and vibration therapy.5 Among all the techniques micro-osteoperforation was reported to be the most popular among professionals (69.8%). While applying the questionnaire to orthodontists it was observed that most professionals are familiar and aware of the procedures for accelerating tooth movement and consequently shortening the duration of orthodontic treatment.

However very less number of orthodontists are adopting these methods to reduce treatment time in their practice.6 Although literature describes that tooth movement is much faster while applying these procedures but still professionals hardly use it, probably due to its invasive nature, complications, cost, patient compliance, etc.

The concept of using physical approaches came from the idea that applying orthodontic forces causes bone bending (bone bending theory) and bioelectrical potential develops. The concave site will be negatively charged attracting osteoblasts and the convex site will be positively charged attracting osteoclasts as detected by Zengo7 in his measurements on dog alveolar bone. Photobiomodulation or low level laser therapy (LLLT) is one of the most promising approaches today. Laser has a biostimulatory effect on bone regeneration, which has been shown in the midpalatal suture during rapid palatal expansion,8, 9 and also stimulates bone regeneration after bone fractures and extraction site.10, 11 It has been found that laser light stimulates the proliferation of osteoclast, osteoblast, and fibroblasts, and thereby affects bone remodeling and accelerates tooth movement. The mechanism involved in the acceleration of tooth movement is by the production of ATP and activation of cytochrome C, as shown in12, 13, 14 that low-energy laser irradiation enhanced the velocity of tooth movement via RANK/RANKL and the macrophage colony-stimulating factor and its receptor expression.15

The surgical technique has been documented in many case reports. It is a clinically effective technique used for adult patients, where duration of orthodontic treatment may be critical in selected groups of patients.16 The PDL and alveolar bone remodeling are the important parameters in tooth movement, and bone turnover is known to increase after bone grafting, fracture, and osteotomy. Several surgical approaches that have been tried in order to accelerate tooth movement were interseptal alveolar surgery, osteotomy, corticotomy, and Piezocision technique. In the rapid canine distraction of PDL, the interseptal bone distal to the canine is undermined surgically at the same time of extraction of the first premolars, thus, this will reduce the resistance on the pressure site. In this concept the compact bone is replaced by the woven bone, and tooth movement is easier and quicker due to reduced resistance of the bone.17 It was found that these rapid movements are during the initial phases of tooth movement especially in the first week as show in.18

It is recommended the use of corticotomies in patients with orthodontic appliances with short roots, to avoid reabsorption caused by bone resistance during dental movements, patients with loss of bone tissue or hypoplasia of the jaws that require bone remodeling, patients with dental ankylosis for decrease the alignment time, patients with teeth retained to accelerate their anatomical positioning within the arches, patients with extreme skeletal classes to avoid orthognathic surgery and patients with severe crowding.19

In 2001 Wilcko20 reported that the acceleration of tooth movement is not due to the bony block movement as postulated by Kole; 21 it was rather a process of bone remodeling at the surgical site, which was called regional acceleratory phenomenon (RAP). He developed patent techniques which were called accelerated osteogenic orthodontics (AOO) and periodontal accelerated osteogenic orthodontics. Also, modification of RAP was done by adding bioabsorbable grafting material over the injured bone to enhance healing.

Further research on the awareness of the different treatment protocols in accelerating tooth movement, and its acceptability amongst orthodontists is suggested. Further research is needed to clear the ambiguity regarding the effectiveness of accelerated orthodontics in reducing orthodontic treatment time is required.

The survey reported that maximum of orthodontists are not very satisfied with the conventional orthodontic treatment time duration hence they are familiar and aware about the accelerated orthodontic procedures. However, these accelerated techniques are less adopted in their clinical practice might be due to patient compliance, cost, invasiveness, complications, etc.