Understanding the moment to force ratio in loops

Loop mechanics is a determinate force system if used in the right way. Understanding the mechanics is of prime importance while dealing with loop mechanics. The moment to force ratio determines the type of movement. To move teeth in a predictable manner, a thorough control on moment to force ratio is necessary. This can be done with the help of closing loops. A thorough understanding of the M/F ratio is required for the correct clinical application of the loops.

Space closure requires a solid comprehension of biomechanics in order to avoid undesirable side effects.1 Infact it is one of the most challenging procedure. To move teeth in a controlled fashion and achieve optimum results, various factors should be considered including correct mechanical principles, appropriate interplay between the orthodontic appliance and anatomic structures and the efficacy of tooth movement.2 The 2 methods of space closure include

In general, six goals should be considered for space closure:

Closing loops are used in orthodontics with both segmental and continuous arch wires to generate the desired forces and moments to move teeth in a predictable manner. Since they are frictionless, the force generated by loops can be applied directly to a tooth or a group of teeth thereby preventing unwanted resistance. 4

The spring characteristics of the closing loops are determined by:

The moment-to-force ratio is probably the most important characteristic of a retraction arch-wire. Simplicity of fabrication and delivery is always secondary to Low load/deflection, efficiency and space closure control.

What is moment to force ratio

The type of movement exhibited by a tooth is determined by the ratio between the magnitude of the couple (M) and the force (F) applied at the bracket.7 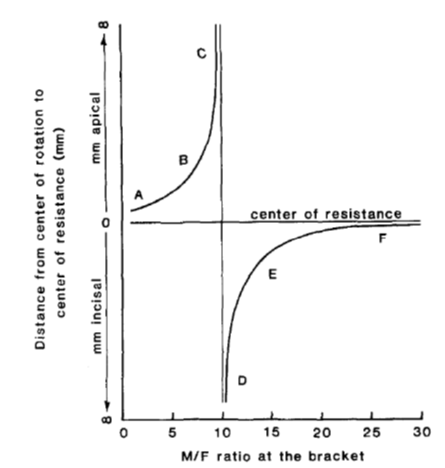 At these relatively high moment-to-force ratio levels, stresses reportedly distribute more evenly through the entire root with minimal changes in the mechanical properties during activation; this reduces injuries to teeth and surrounding tissues.4

Moment of loops can be classified into 2 sub headings

Loop Positioning: Off-centre positioning is also used to modify the moment-to-force ratio. Faulkner et al evaluated that T-loops placed off- centred produced a different moment to force ratio with an increase in moment produced on the bracket which is closer to the loop. 9

Activation moment refers to the one that is incorporated by the addition of activation and pre-activation bends. The activation bends increases the moment to force ratio but has the disadvantage that it deforms the original loop configuration. Gable bends are given to increase the root control, avoiding ‘dumping’ of teeth into the extraction space. The degree of pre-activation bends can also change the anchorage also.6

Hence while closing a space with loops, re-activation of the loops should not be done immediately after the space is closed because, initially, the space closure occurs by controlled tipping followed by bodily movement and finally root movement. Once all the 3 phases of movement are completed, the re-activation is to be done. Hence, a time period of 4 weeks should be the gap between activation of loops.

A perfect example of one such loop is T-loops - Initially after pre-activation, controlled tipping occurs (M/F 8:1), as space closes and spring deactivates, the force level decreases so translation occurs (10:1), further deactivation leads to root movements (12:1).10

The moment present in A is the inherent moment while that present in the B after pre-activation bends is both inherent and residual moment. 11

The results of the study done by Faulkner et al clearly showed that the ordinary vertical loop, even with the modifications outlined, is limited in it’s ability to produce M/F ratios that approach those necessary for translation or even controlled tipping. The largest M/F ratio was less than 4 mm and was essentially constant over a very limited activation range (0 to 1.5 mm). Hence, pre-activation bends were incorporated to increase the moment to force ratio to desirable levels. 12 But this produced the risk of deforming the loop design, thus the amount of activation could not be determined leading to indeterminate force systems.

Introduced by Siatkowski, this loop has an L shape with a helix in the apical portion of the L to increase the moment-to-force ratio. Siatkowski reported that the Opus 70 loop, with the vertical legs tipped 700 backward, had a moment-to-forceratio as high as 8.7 mm, which was higher thancould be obtained by vertical loops or T-loops with similar dimensions. 4 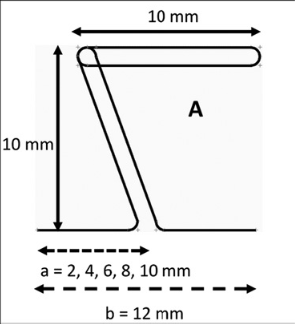 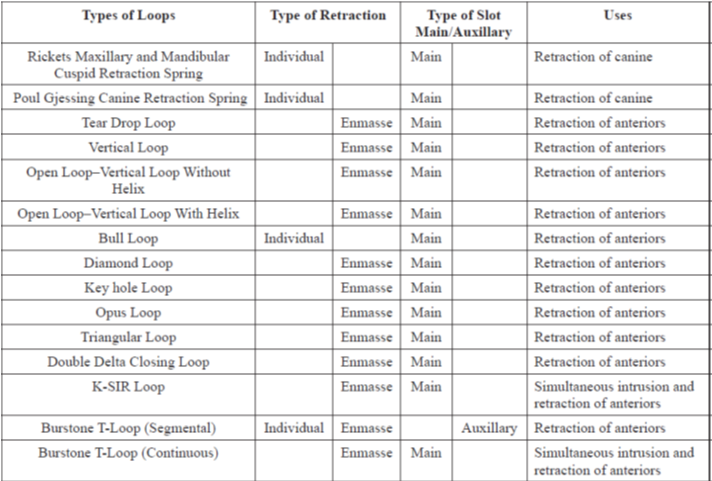 AS Shahroudi The Role of Loop Height and Design on its Force Characteristics in Alignment of Teeth: A Finite Element AnalysisIran J Ortho20161115311